by Jane Crompton
in Lunch Recipes

Many folks believe that their favourite restaurant dishes or recipes are challenging to accomplish skillfully, require a ton of additional supplies, or are so labour-intensive as to negate the need to try concocting the dishes at home. I am here to tell you that it is easier than you think to make a pho recipe at home, and it’s infinitely more delicious.

Now, before you purists out there screaming at me for mixing meat sources in a pho broth, the idea was to use what I had on hand. Traditionally, pho is made with just beef bones or just chicken bones, but I decided to use both and a spare pork shoulder bone I had lying around.

If you’re craving a delicious, hearty, flavorful soup as the months get colder and colder, look no further than my best attempt to make this pho recipe! 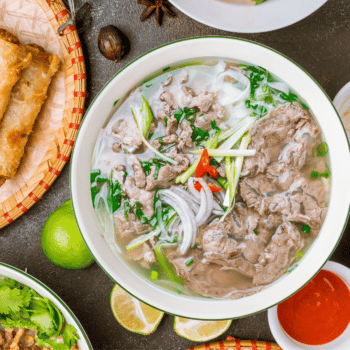 Grain-Free Pizza Recipe With a Crunchy and Crispy Crust