by Elenor Craig
in Dinner Recipes

Picture of the Best Moroccan Chicken Pastilla ready to serve.

I was instantly intrigued. How could something as savory as chicken be combined with powdered sugar like a dessert as a dinner recipe?

Believe it. It just works for the recipe.

Traditionally made with pigeon, Moroccan Chicken Pastilla is a savory pie filled with meat, spices and eggs to form almost a custard. Ground toasted almonds are added in as well as a touch of sugar.

The filling is then set inside a pan patterned with phyllo dough. Once out of the oven, a heavy hand of powdered sugar is decorated on top as a finishing touch.

I made this in a round 9-in cake pan, but you can also build this Moroccan Chicken Pastilla dish on a pie plate or even as small individual appetizers by spreading the filling on a piece of phyllo dough and folding it like the brik in the photos that follow. 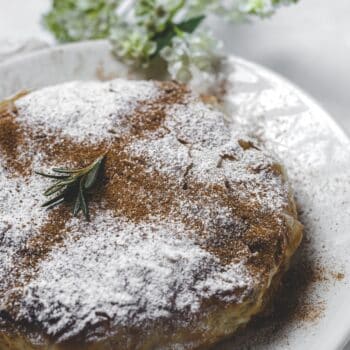