Picture of Quick And Easy Chicken Pasta With Spinach And Tomatoes In A Parmesan Cream Sauce ready to serve.

Chicken Pasta With Spinach And Tomatoes In A Parmesan Cream Sauce. Hey Hey Hey!!! It’s almost the weekend, and in just a little under 4 hours, I will be headed to the house for the weekend! Thank goodness!!! It’s been such a long week, and I’m dying to get it over with. This week has been super busy at work.

Thankfully it hasn’t been too bad today. Since it’s a little slow, then I’m gonna catch up on a blog post that I’ve been trying to do all week. The past week I made Chicken Pasta with Spinach and Tomatoes in a Parmesan Cream Sauce. I was really surprised that the whole family enjoyed this dinner recipe so much, especially since I was just throwing stuff together to make a quick and easy meal.

But I gotta say, these quick and easy Chicken Pasta With Spinach And Tomatoes In A Parmesan Cream Sauce is usually the one that everyone enjoys the most, other than the recipes that you can just throw in the crock pot and leave it all day to do its magic. I had myself throw a roast in the crock pot yesterday morning for dinner last night since goofball me forgot to set it out to thaw. Of course, I didn’t think it turned out right cause I did it, but it was very good.

Now you give me a grill or smoker, you better watch out cause anything I cook up turns out amazing! I honestly think I would grill out every night. Heck, I don’t mind one bit, though. It all works out great!

Okie dokie guys, enough of all the chit-chat. Let’s get to the Chicken Pasta With Spinach And Tomatoes In A Parmesan Cream Sauce recipe that I whipped up the other evening. Yes, and it’s another, close to, 30-minute meal.

Dice chicken into bite-size pieces. Add spinach and tomatoes to chicken half and half added and bring to a boil. 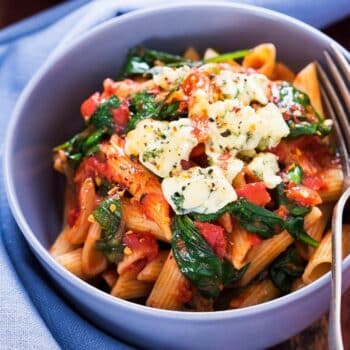